The Virtue of Open-mindedness 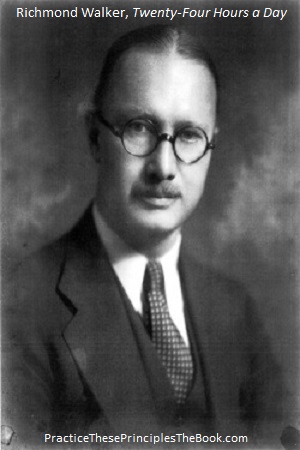 "Since open-mindedness and experimentation are supposed to be the indispensable attributes of our ‘scientific’ civilization, it seems strange that so many scientists are reluctant to try out personally the hypothesis that God came first and man afterward." – Bill W., As Bill Sees It

"Faced with alcoholic destruction, we soon became as open-minded on spiritual matters as we had tried to be on other questions. In this respect alcohol was a great persuader. It finally beat us into a state of reasonableness." – Big Book

"True humility and an open mind can leads us to faith, and every AA meeting is an assurance that God will restore us to sanity if we rightly relate ourselves to Him." – 12&12

"It is the mark of an educated mind to be able to entertain a thought without accepting it." – Aristotle

"If someone is able to show me that what I think or do is not right, I will happily change, for I seek the truth, by which no one was ever truly harmed. It is the person who continues in his self-deception and ignorance who is harmed." – Marcus Aurelius

"I shall adopt new views as fast as they shall appear to be true views." – Abraham Lincoln

"The question is not what you look at, but what you see." – Henry David Thoreau

"Let the mind be enlarged . . . to the grandeur of the mysteries, and not the mysteries contracted to the narrowness of the mind." – Francis Bacon

"'Dogs and cats should always be brought up together,’ said someone, 'it broadens their minds so.'" – C. S. Lewis

"[L]isten to others, even the dumb and the ignorant; they too have their story." – Max Ehrmann, Desiderata

"The most important quality for a judge is open- mindedness to the arguments." – Samuel Alito

"Books, minds, and umbrellas are only good if you open them." – Anonymous

"A wise person knows there’s something to be learned from everyone." – Anonymous

"The mind works like a parachute. It doesn’t work unless it’s open." – Frank Zappa

"To think that there is no truth or that no action is better than any other is not to be open-minded, but to abandon any attempt at rational discrimination. It is to shut down reason, rather than to pursue free inquiry." – Montague Brown

"Because I did not feel used or conned by those in A.A., I was able to approach the program free from bias and with an open mind." – A.A.'s Daily Reflections

"’I will not resist the impact of a new idea. It may just be the one I’ve needed without being aware of it. I will make my mind more flexible and receptive to new points of view.'" – One Day at a Time in Al-Anon

"Sometimes, when the going gets especially hard, we're tempted to follow the path of least resistance and live by our old ideas again. We forget that our old ideas were killing us. To live a new way of life, we need to open our minds to new ideas." – Just for Today: Daily Meditations for Recovering Addicts

"A secular view of open-mindedness, however, carries a built-in exception where the virtue doesn’t apply. That exception is God and the spiritual realm. For many of us being open-minded and believing in God were mutually exclusive." – PTP123

"We don’t live in a vacuum, and so the depth and breadth of our self-knowledge—which is the central goal of ourself-examination in the inventory process—is ultimately a function of our knowledge of other human beings in all their diversity and complexity." – PTP4