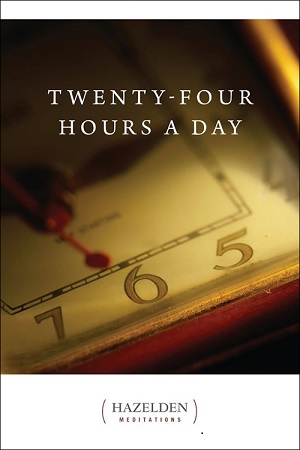 At the time of its publication, Twenty-four Hours a Day filled a spiritual vacuum among recovering alcoholics. Step 11 in Alcoholics Anonymous called for daily prayer and meditation, but it had left no detailed instructions for how to practice these disciplines. Instead, the Big Book (BB) suggested one memorize a few set prayers which emphasize the principles it discusses and seek further advice from one’s priest, minister, or rabbi.

That pretty much left alcoholics with religious devotionals, which of course were not written for drunks and which, then as now, don’t address the special needs of those in recovery. It was nevertheless one of these devotionals, God Calling, which inspired one particular alcoholic to write a book that would actually speak to his fellow drunks.

What would be known as the Little Black Book (LBB) started as a series of small cards Richmond Walker wrote out for his own personal use. Wanting to share in these meditations, members of the AA group in Daytona Beach encouraged Rich to turn them into a book and publish it under the group’s sponsorship.

Printed at the local county courthouse and distributed from Rich’s basement, the book was an immediate success. Between 1948 and 1954 (when Hazelden picked it up), the book sold 18,000 copies, a considerable figure given the size of AA at the time. It went on to spawn the new genre of the modern meditation book, launched Hazelden into the publishing business, and became the best-selling recovery work after the BB, with sales now surpassing 10 million.

The LBB was published anonymously, the only reference to its author being a note in the back to the effect that it was “Compiled by a member of the Group at Daytona Beach, Fla.” Richmond Walker was born of a well-to-do family in Brookline, a suburb of Boston. He was intelligent and highly educated, a thinker attracted to the likes of Plato and Kant. His drinking career started in college at the age of 20 and ended 27 years later in 1939, when he got sober in the Oxford Group (OG). After a brief relapse in 1941, he joined the newly-founded AA group in Boston in 1942. Three years later he published “For Drunks Only” under the sponsorship of the Quincy group of AA, a pamphlet that would also inspire the LBB, a work he started after his move to Daytona.

Organizationally, the LBB is a model of simplicity. Each page (measuring only 3" x 8") has three sections: AA Thought for the Day, Meditation for the Day, and Prayer for the Day, with the last two printed in a smaller font than the first. The Thought takes roughly the first half of the page, with the Meditation covering most of the second half and the Prayer usually the last three lines. This arrangement is consistent throughout the work.

The three sections generally form a thematic whole. The first introduces a theme and concludes with a question that refocuses the reader’s attention on a main idea within that theme (sometimes the entire passage may be a series of questions). The second moves one or more ideas in the theme to the level of sustained meditation. The third prays that an ideal or aspiration contained in the thought or meditation may become a practical reality in one's own person and life.

Thought, meditation, and prayer are therefore closely linked to each other. They form a spiritual continuum that engages head, heart, and imagination. Here meditation does not seek to bypass reason or dispense with prayer, as some forms of meditation do. Instead, there’s a harmonious integration of the three which involves deep spiritual reflection and contemplation. The classic model is found in the St. Francis Prayer in Step 11 of AA’s Twelve Steps and Twelve Traditions (12&12), published seven years after the LBB.

Looking briefly at each of the three sections, we will find that the AA Thought for the Day, as the first word suggests, centers around our experience as alcoholics. Much of it is adapted from Walker’s earlier work, “For Drunks Only,” and from the BB, which it quotes liberally. As such, it usually has a narrative cast and speaks in terms of “we” or “I” in relation to our drinking past and our recovery in AA. Some of the “I” passages (e.g. 03/29 – 04/04) are clearly autobiographical, where, following the BB, Rich shares what he was like before he came to AA and what he is like now that he’s sober.

Though the new edition (2013) includes an index, it doesn't quite do justice to the book.  It is still easy to miss the fact that the AA experience shared in the Thought is often organized around well-defined recovery themes. These themes may be broad and cover a continuous range of pages, or narrow and cover single pages at different points in the work.

The Meditation for the Day centers broadly on our spiritual awakening. Part of the material in this section is adapted from the aforementioned God Calling, which Walker used in the OG. Sometimes the meditations take the form of affirmations or declarations of spiritual intention. Other times they may be resolutions, but, rather than expressions of self-will, these are more like reminders of spiritual attitudes to cultivate. There are also examples of self-talk intended for spiritual encouragement along the lines of some of the psalms of David.

In addition to specific principles like faith or humility, these meditations cover broad themes such as the spiritual life, spiritual experience, conscious contact, God as we understood him, and practicing the presence of God. What is unique about these mediations is that they manage to be spiritual and at the same time practical, inspirational, and at the same time substantive. There’s little fluff in them.

The Prayer for the Day is typically introduced with “I pray that” and has the ring of an aspiration more than of a direct petition. Nor is the prayer addressed directly to God, though it is grounded in God as the source of the power which can make the aspirations of the prayer materialize in our individual lives. Here again, spirituality combines with practice and is grounded in experience.

Like the BB, the LBB was heavily influenced by the OG. However, the LBB continues to give prominent display to some concepts the BB has abandoned. Among these are the Four Absolutes (honesty, purity, unselfishness, love, as in 08/29), though the term “absolute” (which is what alcoholics objected to) is avoided and the concept is qualified by the addition of two other essential qualities: humility and gratitude. There’s also the concept of the 5Cs (confidence, confession, conviction, conversion, continuance, as in 05/23 – 05/27), which relates to 12th-Step work with other alcoholics and at times may come across as a little too rigid and religious.

The LBB also uses Biblical allusions more frequently and more directly. The Apostle Paul is mentioned by name on a couple of occasions and direct reference is made to the parables of the Good Samaritan and the Prodigal Son. Sometimes scriptures are cited directly and placed within quotation marks, but the source is left unidentified. Most of the time, however, the LBB follows the BB precedent of using scripture without quotes or any kind of attribution. An in all cases passages are used to make a practical spiritual point rather than a doctrinal or a theological one.

We may also find some differences in tone. The BB moved away considerably from the language of duty, obligation, and exhortation, for instance. The LBB retains some of this idiom, most obviously in its excessive use of what some AAs call “musty” language, as in the Thought entries of 03/08 and 05/25, where an imperative “must” is stressed in every sentence. Being told what we “must” do doesn’t work that well for us alcoholics. We prefer hearing what the other person is doing to work the program and how that’s working in his or her life.

That’s why the BB adopted a narrative, experience-based approach that favors the use of more modest terms like “may,” and which, by stressing the use of “we” and “I,” tries to encourage sharing and identifying. The LBB follows this model in most of the Thought entries, but in the Meditation it often continues to follow an old instructional and injunctive approach in which the reader is addressed repeatedly as “you” (e.g. 10/10, 10/12, 10/14). To recovering ears, this often sounds a little too preachy, very much the way “must” does. “You” is the formal mode of address of the authority and of the expert, of the lecturer, the teacher, and the preacher. It’s not the language of the heart or of the fellow sufferer. It's a “we” program, we say in the rooms.

The LBB is a transitional work between religion and AA spirituality, and so these flaws are the remnants of an old approach. But they are flaws that LBB has largely left behind, though not as much as we might like. As a whole, the LBB is closer to the letter and the spirit of the BB and of the 12 Steps than any other book in the secondary AA literature. And, it packs more of the program in each of its little pages than any other work. For the recovering alcoholic who wants to practice prayer and meditation on a daily basis, the book still has no equal.

That is in any case my experience. I started using the LBB in 1984 when I was newly sober. After a while, I migrated to other books of meditation, many of them published by Hazelden. Eventually, those books wore thin. Six years ago I returned to the LBB and have been using it every day since. Unlike the first time around, it is now heavily marked and annotated. No matter how many times I have read a selection, I often find something useful to reflect upon. It centers me on the spiritual program of recovery. It reminds me where I came from and where I'm going, and it shows me how I can hope to live my life today, one day at a time.