The Virtue of Acceptance 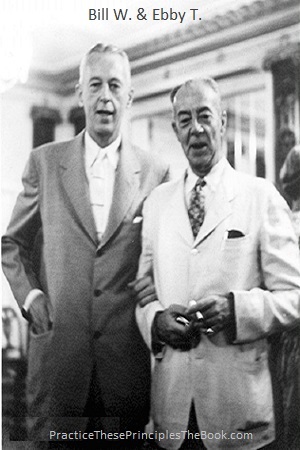 "Our very first problem is to accept our present circumstances as they are, ourselves as we are, and the people about us as they are. This is to adopt a realistic humility without which no genuine advance can even begin. Again and again, we shall need to return to that unflattering point of departure. This is an exercise in acceptance that we can profitably practice every day of our lives." – Bill W., ABSI, p. 44

"Until I could accept my alcoholism, I could not stay sober; unless I accept life completely on life’s terms, I cannot be happy." – Big Book, p. 417

"We know that little good can come to any alcoholic who joins A.A. unless he has first accepted his devastating weakness and all its consequences. Until he so humbles himself, his sobriety—if any—will be precarious. Of real happiness he will find none at all." – 12&12, p. 21

"God, grant me the serenity to accept the things I cannot change, the courage to change the things I can, and the wisdom to know the difference." – The Serenity Prayer, 12&12, p. 41

"An oak and a reed were arguing about their strength. When a strong wind came up, the reed avoided being uprooted by bending and leaning with the gusts of wind. But the oak stood firm and was torn up by the roots." – Aesop

"When you are outraged by somebody’s impudence, ask yourself at once: ‘Can the world exist without impudent people?’ It cannot; so do not ask for impossibilities." – Marcus Aurelius

"Let us train our minds to desire what the situation demands." – Seneca

"He who cannot do what he wants must make do with what he can." – Terence

"If the alcoholic can truly accept the presence of a Power greater than himself . . . and sustain that feeling of acceptance, he can and will remain sober for the rest of his life." – Dr. Harry M. Tiebout

"Acceptance of what has happened is the first step to overcoming the consequences of any misfortune." – William James

"We cannot change anything unless we accept it. Condemnation does not liberate, it oppresses." – Carl Jung

"Once we accept our limits, we go beyond them." – Albert Einstein

"Some people confuse acceptance with apathy, but there’s all the difference in the world. Apathy fails to distinguish between what can and cannot be helped; acceptance makes that distinction. Apathy paralyzes the will to action; acceptance frees it by relieving it of impossible burdens." – Arthur Gordon

"Ah, when to the heart of man / Was it ever less than a treason / To go with the drift of things, / To yield with a grace to reason, / And bow and accept the end / Of a love or a season?" – Robert Frost

"Being happy doesn't mean that everything is perfect. It means that you've decided to look beyond the imperfections." – Anonymous

"Accepting oneself does not preclude an attempt to become better." – Flannery O’Connor

"The reasonable man adapts himself to the world; the unreasonable one persists in trying to adapt the world to himself." – George Bernard Shaw

"[T]he best thing one can do when it is raining is to let it rain." – Henry Wadsworth Longfellow

"One of the many lessons that one learns in prison is that things are what they are and will be what they will be." – Oscar Wilde

"Part of the happiness of life consists not in fighting battles, but in avoiding them. A masterly retreat is in itself a victory." – Norman Vincent Peale

"Accept what is. Let go of what was. Have faith in what will be." – Anonymous

"It is what it is. But it will become what you make it." – Anonymous

"Only by acceptance of the past can you alter it." – T. S. Eliot

"The beginning of love is to let those we love be perfectly themselves, and not to twist them to fit our own image. Otherwise we love only the reflection of ourselves we find in them." – Thomas Merton

"Accept both compliments and criticism. It takes both sun and rain for a flower to grow." – Anonymous

"When we accept rather than expect, we have fewer disappointments." – Anonymous

"The curious paradox is that when I accept myself as I am, then I can change." – Carl Rogers

"Whatever comes, let it come. Whatever stays, let it stay. Whatever leaves, let it leave.” – Anonymous

"A secret to happiness is letting every situation be what it is instead of what we think it should be, and then making the best of it." – Anonymous

"If you can’t do anything about it, then let it go. Don’t be a prisoner of things you can’t change." – Anonymous

"Accept the situation and move on." – Anonymous

"Lorem Ipsum is simply dummy text of the printing and typesetting industry. Lorem Ipsum has been the industry's standard dummy text ever since the 1500s,when an unknown printer took a galley of type and scrambled it to make a type specimen book." – XYZ

"Acceptance: The way to serenity and peace of mind." – Vincent Paul Collins

"When I accept situations as they are, not as I wish them to be, then I can begin to grow and have serenity and peace of mind." – A.A.’s Daily Reflections

"Acceptance does not mean submission to a degrading situation. It means accepting the fact of a situation, and then deciding what we will do about it." – One Day at a Time in Al-Anon

"Yes, but . . .’ These two words have become a signal to me that I am refusing to accept something over which I am powerless." – Al-Anon’s Courage to Change

"It becomes easier to accept other members’ frailties when we remember that we ourselves rarely turn over our own character defects until we become painfully aware of them." – Just for Today: Daily Meditations for Recovering Addicts

"The proper relationship between understanding and acceptance then is that acceptance comes first. That is the point of departure. We can paraphrase Augustine and say that we accept in order to understand, and we understand the better to accept." – PTP123

"Acceptance of what we cannot change opens the door to changing what we can." – PTP4