The Discipline of Surrender 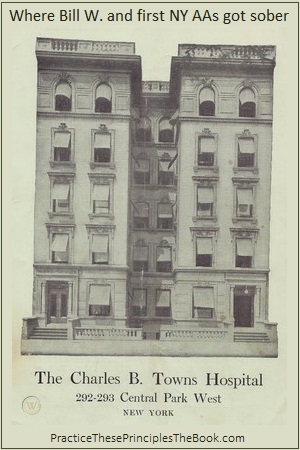 "Beaten into complete defeat by alcohol, confronted by the living proof of release, and surrounded by those who can speak to us from the heart, we have finally surrendered.” – Bill W., As Bill Sees It, p. 174

"With all the earnestness at our command, we beg of you to be fearless and thorough from the very start. Some of us have tried to hold on to our old ideas and the result was nil until we let go absolutely.” – Big Book, p. 58

"We perceive that only through utter defeat are we able to take our first steps toward liberation and strength. Our admissions of personal powerlessness finally turn out to be firm bedrock upon which to build happy and purposeful lives." – 12&12, Step 1, p. 21

"The process which comes before the act of surrender is the long discovery that the way of self is no way at all, and leads nowhere—the lonely, despairing, fevering desire to be rid of oneself. And the process which comes after the act of surrender is the steady matching-up of the actual with the ideal, the rethinking and remolding [of] life in accordance with the great decision." – Sam Shoemaker

"I know what happened to me. I heard it in a hymn yesterday. I surrendered when I had that experience.” – Marty M.

"[A] conversion occurs when the individual hits bottom, surrenders, and thereby has his ego reduced. His salvation lies in keeping that ego reduced, in staying humble . . . . If he did not surrender, a thousand crises could hit him and nothing would happen.” – Dr. Harry Tiebout

"Your proper concern is alone the action of duty, not the fruits of the action. Cast then away all desire and fear for the fruits, and perform your duty." – The Bhagavad Gita

"Love conquers all; let us too yield to love." – Virgil

"Thou must learn to renounce thy own will in many things, if thou wilt keep peace and concord with others." – Thomas à Kempis

"Unless you have made a complete surrender and are doing his will, it will avail you nothing if you've reformed a thousand times and have your name on fifty church records.” – Billy Sunday

For us there is only the trying. The rest is not our business." –  T. S. Eliot

"I must be willing to give up what I am in order to become what I will be." – Albert Einstein

"Any real change implies the breakup of the world as one has always known it, the loss of all that gave one an identity, the end of safety. And at such a moment, unable to see and not daring to imagine what the future will now bring forth, one clings to what one knew, or dreamed that one possessed. Yet, it is only when a man is able, without bitterness or self-pity, to surrender a dream he has long possessed that he is set free - he has set himself free - for higher dreams, for greater privileges." – James Baldwin

"Once you have surrendered yourself, you make yourself receptive.” – Fulton J. Sheen

"The proper good of a creature is to surrender itself to its Creator—to enact intellectually, volitionally, and emotionally, that relationship which is given in the mere fact of its being a creature. When it does so, it is good and happy." – C. S. Lewis

"Take away from love the fullness of self-surrender, the completeness of personal commitment, and what remains will be a total denial and negation of it.” – Pope John Paul II

"You give up nothing when you give up everything, because you gain the whole world." – Tim Keller

"Whisper words of wisom, 'Let It be'". – Paul McCartney

"When I am trapped in thoughts about what I want and what should be coming to me, I am in a state of fear or anxious anticipation and this is not conducive to emotional sobriety. I must surrender—over and over—to the reality of my dependence on God, for then I find peace, gratitude, and spiritual security.” – AA’s Daily Reflections

"[Miracles] are always accompanied by a real desire to conquer self and to surrender one’s life to God." – Twenty-Four Hours a Day

"Letting go is a learned behavior. Like any habit, practice will make it a natural response. Freedom to fully respond to any experience can only be attained when we have sacrificed the outcome to whatever the bigger picture dictates." – The Promise of a New Day

"Letting go doesn’t mean releasing our grip on life and falling into the abyss below. Letting go is a gentle process of easing the grip on some facet of our lives: an obsession, a character defect, or negative feelings toward someone.” – Night Light

"Life seems to be a continuous pattern of getting committed to things and having to let go—falling in love and losing the one we love, developing a job skill and having to change careers, caring for our children and letting them go off into the world. This is the rhythm of life, and our spiritual growth teaches us to make peace with it.” – Touchstones

"Surrendering the defect and practicing the virtues is how we can begin to replace our liabilities with the assets we are all capable of developing, for these are innate capacities in us whose full realization we have fallen short of." – PTP4