The Virtue of Courage 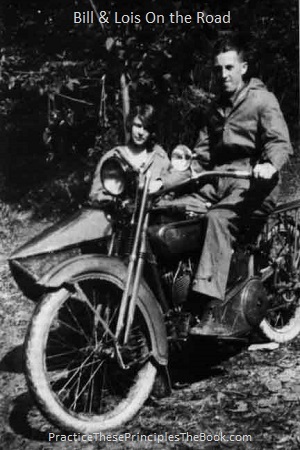 "When fear persisted, we knew it for what it was, and we became able to handle it. We began to see each adversity as a God-given opportunity to develop the kind of courage which is born of humility, rather than of bravado." – Bill W., As Bill Sees It

"The wisdom of the ages is that faith means courage. All men of faith have courage. They trust their God." – Big Book

"Good judgment, a careful sense of timing, courage, and prudence—these are the qualities we shall need when we take Step Nine." – 12&12

"Be strong and courageous. Do not be afraid, for the LORD your God goes with you; he will never leave you nor forsake you." – Deuteronomy 31:6-8
“Be strong and take heart, all you who hope in the Lord." – Psalm 31:24

"Being deeply loved by someone gives you strength, while loving someone deeply gives you courage." – Lao Tzu

"Courage is knowing what not to fear." – Plato

"The burden which is well borne becomes light." – Ovid

"Fortitude is love bearing all things for the sake of the beloved." – St. Augustine

"Fortitude without justice is a lever of evil." – St. Ambrose

"That valor which has not prudence for its guide falls under the name of rashness; and the rash man’s successful actions are rather owing to his good fortune than to his bravery." – Miguel de Cervantes

"An imperfect human being needs more fortitude to pursue the way of perfection than suddenly to become a martyr." – St. Theresa of Ávila

"Bravery has no place where it can avail nothing." – Samuel Johnson

"Do not lose courage in considering your own imperfections." – St. Francis de Sales

"How few there are who have courage enough to own their faults, or resolution enough to mend them." – Benjamin Franklin

"It is curious that physical courage should be so common in the world and moral courage so rare." – Mark Twain

"A great part of courage is the courage of having done the thing before." – Ralph Waldo Emerson

"Courage isn't having the strength to go on, it is going on when you don't have strength." – Napoléon Bonaparte

"Facing it, always facing it, that's the way to get through. Face it." – Joseph Conrad

"I learned that courage was not the absence of fear, but the triumph over it. The brave man is not he who does not feel afraid, but he who conquers that fear.”
– Nelson Mandela

"Some people believe holding on and hanging in there are signs of great strength. However, there are times when it takes much more strength to know when to let go and then do it." – Ann Landers

"Only those who risk going too far can possibly find out how far one can go." – T. S. Eliot

"Courage is not simply one of the virtues, but the form of every virtue at the testing point." – C. S. Lewis

"Inaction breeds doubt and fear. Action breeds confidence and courage. If you want to conquer fear, do not sit home and think about it. Go out and get busy."
– Dale Carnegie

"Courage is the price that life exacts for granting peace." – Amelia Earhart

"The true soldier fights not because he hates what is in front of him, but because he loves what is behind him." – G. K. Chesterton

"Courage is fear that has said its prayers." – Karl Barth

"If you are lucky enough to find a way of life you love, you have to find the courage to live it." – John Irving

"Success is not final, failure is not fatal: it is the courage to continue that counts."  – Winston Churchill

"Fortitude presupposes in a certain sense that man is afraid of evil; its essence lies not in knowing no fear, but in not allowing oneself to be forced into evil by fear, or to be kept by fear from the realization of the good." – Josef Pieper

"Bran thought about it. ’Can a man still be brave if he's afraid?' 'That is the only time a man can be brave,' his father told him." – George R. R. Martin

"At least three times every day take a moment and ask yourself what is really important. Have the wisdom and the courage to build your life around your answer." – Lee Jampolsky

"Each mistake teaches you something new about yourself. There is no failure, remember, except in no longer trying. It is the courage to continue that counts."
– Chris Bradford

"Courage is very important. Like a muscle, it is strengthened by use." – Ruth Gordon

"Everyone has talent. What's rare is the courage to follow it to the dark places where it leads." – Erica Jong

"Without courage, we cannot hold out against the worst in ourselves or others." – André Comte-Sponville

"Fortitude is most basically defined as the virtue that enables one to face obstacles or difficulties well. The brave person is not swayed by trials and tribulations from her pursuit or grasp of goodness." – William C. Mattison III

"The courage to change the things we can is found in our continuously-developing relationship  with a Power greater than ourselves." – Al-Anon's Courage to Change

"Accepting what cannot be changed can involve its own characteristic kind of courage, especially when we are facing great adversity, such as suffering through a serious illness or loss. This is a quiet kind of courage, less dramatic, less episodic, more enduring." – PTP123

"The courageous person feels fear as the situation demands, but not in ways that preclude morally right action. A person may properly experience apprehension before the prospect of making amends for very serious harm but still go ahead and make the amends." – PTP4