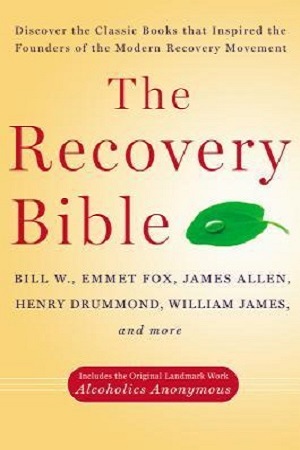 The Recovery Bible, by Anonymous

The Recovery Bible is an anthology of the original, first-edition Big Book (complete with stories) and works by William James (The Varieties of Religious Experience) and others who are said to have influenced early AA. The book’s main value is one of convenience, in that it brings these various works together into one volume. Until recently, a first-edition copy of the Big Book was difficult to find, but that is no longer a problem now that AA World Services has published the 75th-anniversary edition of that work. All the other selections are available in various editions.

The six selections that accompany the Big Book fall into two groups. On one side is William James, Sam Shoemaker, and Henry Drummond, all of whom emphasize a practical, experience-based spirituality. James is recognized for his contribution to AA’s understanding of a spiritual experience and awakening, and its relation to the concept of surrender. Shoemaker was the Oxford Group’s leader in NYC with whom Bill W. worked very closely and to whom he attributed many of the ideas that went into the 12 Steps. His emphasis on a faith that works is also found in "The Greatest Thing in the World," by Henry Drummond. The latter places great stress on the virtues (e.g., humility, kindness, love) as spiritual principles and on the concept of practice as the means of acquiring and living them out. A common theme in all three works is the idea that to a great extent you are what you do. Hence the need for right action.

The other three writings represent ideas once linked to "New Thought" and now associated with the self-help and New Age movements. These are Ralph Waldo Trine’s “In Tune with the Infinite” (the law of attraction), Emmet Fox’s “The Mental Equivalent” (change your thought and your mind will follow), and James Allen’s As a Man Thinketh (as you think, so you are). These writings trade on the idea that who you are and what happens to you is to a great extent determined by the way you think. Thought is understood not so much in rational as in mystical terms, as a universal force or cosmic stream with which we need to align our own thinking if we are to succeed in life.

Anthologies generally have an editor. This one doesn’t. That may account for its main deficiency, with is the absence of an introduction which would put each selection in context and show how the Big Book was influenced by it. The brief, one-paragraph biographical note for each author in the back of the book doesn’t compensate for this lack.

Notwithstanding that, the anthology is worth owning, though reading the six supplemental works (other than the Big Book) requires great commitment and patience.