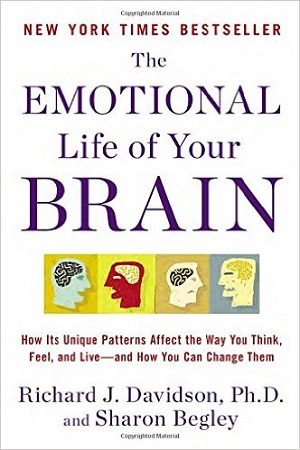 The Emotional Life of Your Brain, by Richard J. Davison, with Sharon Begley

Those of us committed to personal growth will find much that is rewarding in The Emotional Life of Your Brain. Davidson draws on an array of scientific experiments and studies to develop a set of ideas that can add to our understanding of how the “emotional brain” works, how its unique patterns affect the way we think, feel, and live, and how we can change them.

Three of these ideas are worth highlighting here. The first is that contrary to the way we tend to think about it, personality and temperament, though innate, are not fixed or immutable. That traditional view was reinforced in the age of genetics by “The dogma that ‘genetic equals unchangeable.’” If a “negative” trait (say shyness) is inherited and in your genes, you’re stuck with it. Instead, says Davidson, “plasticity is intrinsic to the brain,” and its “ability to change its structure and function in significant ways” extends into adulthood and “through the life of the individual.”

The second idea is that such “change can come about in response to experiences we have as well as to the thoughts we think.” Traits that are genetically based can be altered because “the mere presence of a gene is not sufficient for the trait for which it codes to be expressed.  A gene must also be turned on, and studies . . . have shown that life experiences can turn genes on or off.” Thus, “In terms of the shopworn debate called nature vs. nurture, nurture is able to act on nature.” Our brain can be altered by these “experiences as well as by conscious, intentional effort . . . through the intentional cultivation of specific mental qualities or habits.”

And, thirdly, the reason such change is possible is that head and heart are more closely linked in the brain than previously thought: “the barricade that psychology had erected between reason and emotion has no basis in fact.” Emotion involves neural activity in the right and in the left side of the brain, in the amygdala and in the prefrontal cortex. “The circuitry of the emotional brain often overlaps with that of the rational, thinking brain,” so that “Emotion works with cognition in an integrated and seamless way to enable us to navigate the world of relationships, work, and spiritual growth.”

These ideas have broad implications. They suggest that we are not irremediably shaped by our genes, upbringing, environment, or of this or that neural circuitry in our limbic system. We are not at the mercy of our emotions. We can change because our brain can change.

The question of course is how.  Davidson answers this question in the terms of traditional psychology by focusing on personality and temperament, offering a new classification of these traits which he calls “Emotional Style.” His claim is that “Understanding the neural underpinnings of the six dimensions of Emotional Style can empower you to recognize your own” overall style and apply various techniques he recommends to change it in the direction you desire.

Briefly stated, the six dimensions are Resilience (how fast you recover from adversity); Outlook (optimist vs. pessimist); Social Intuition (how adept you are at picking up social signals); Self-Awareness (how well you are in touch with your feelings); Sensitivity to Context (how well you adapt your emotional responses to a given context); and Attention (how well you can focus).

To get an idea of the problems that arise with Davidson’s model, let us consider an example he gives of a situation involving two of these categories: “You might be irritable for a whole day after a morning argument with a coworker but not realize that your funk is the result of being Slow to Recover (This ability to introspect and understand our own emotions is an aspect of the Self-Awareness dimension).”

Now, suppose I answer the book’s questionnaires for these categories, identify their neural correlates in the brain, conclude my styles are “Slow to Recover” and “Self-Opaque,” and follow Davidson’s techniques in the back of the book so that, assuming they work, I’m able to recover faster after my morning argument with my coworker.

Does that improve my relationship with my coworker? Not necessarily. In fact, it could even worsen it, for the more successfully I reduce their negative impact on me and the faster I recover from these arguments, the easier it is to continue having them. They just won’t bother me that much anymore. But they may bother my co-worker, other colleagues, and my boss. My “resilience” could actually end up making a lot of people unhappy, affect my work, and even cost me my job.

This is because traits of personality and temperament do not necessarily correlate with the rightness or wrongness of what I’m doing. They are not moral categories. A high degree of optimism can lead me to take unreasonable risks in business or the stock market and leave me in financial ruin. High social intuition, self-awareness, and sensitivity to context can all help me manage myself better the better to lie and manipulate people. Being highly focused can help me succeed in my career even as it leads me to neglect my family and fail as a spouse and as a parent.

In the situation cited by Davidson, I need to look at more than my “emotional style.” I need to look at what I might be doing wrong, at the moral dimensions of the situation. This means looking at my character, understood as a moral category. Traits of character determine whether a trait of personality or temperament serves a morally worthy or unworthy end, whether it works for good or for ill. But Davidson’s model, which is based on personality and temperament to the exclusion of character, makes no provision for such considerations.

A more effective model for personal growth is found in the 12 Steps of Alcoholics Anonymous, whose principles, it should be noted, can be practiced by anyone. One of these principles is the discipline of self-examination, where I make an inventory of my character defects and associated emotions, taking into account the positive character traits and associated emotions which can displace and replace them. Considered principles of the good life, these positive character traits are traditionally known as virtues, among which, honesty, for instance, is essential to the process of self-examination.

Honestly looking at myself in the above situation, I might find that my “funk” is the result of my nursing a resentment against my coworker. I may be “irritable” because I’m still angry over something she said or did that affected something that is important to me (e.g., my self-esteem), and I’ve been obsessing about it all day. Upon further examination, I may discover that I said or did something which started or contributed to the argument, and that behind my words and actions there were certain character defects at work, perhaps impatience, unkindness, or intolerance. My adversity, as is often the case with many of us, may have been self-inflicted.

Having made such an examination, I move to take corrective action by practicing other applicable principles. Where I am in the wrong, I promptly and humbly admit it, and I sincerely make amends. Where my coworker is in the wrong, I forgive, turn the matter over, and let go of any ill feelings.

By practicing these principles, I can surrender my resentment and obsession, reconcile with my coworker, and restore peace and harmony to our relationship. Not only do I recover from negative emotions myself, but I can help my coworker to do the same. My recovery goal is not self-centered.  I’m not selfishly concerned only about my own wellbeing.

Depending on the situation, I will find other principles that can help me to recover from adversity:  after a loss, for instance, acceptance of the things I cannot change, and gratitude for the things I still do have. By practicing these principles day in and day out and in situation after situation, I am engaging in the kind of conscious, intentional, and repeated effort which Davidson says can help me to acquire the habits which can alter my brain and reshape my thoughts and emotions. I will become better at recovering from adversity, but my recovery will reflect fundamental character and emotional changes, not just an improved personality trait (more resilient).

That personality and temperament are malleable, that emotion and cognition work in an integrated manner, and that experience and thought can reshape the brain are important ideas in Davidson’s book. When it comes to translating these ideas into practice, however, the 12 Steps remain the best program of action.

Note: Much of this review was incorporated into PTP4, Chapter 15: Character and Temperament.