The Concept of Discipline 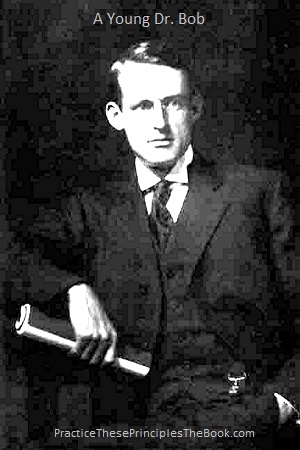 [Image: A young Dr. Bob. A Vermont Yankee like Bill W., Dr. Bob graduated from Dartmouth in 1902, and after being forced out of the University of Michigan because of his drinking, transferred to Rush Medical, from which, despite his continuing to drink, he managed to earn a degree in 1920. For audio of his story,  Q&A about it, and talk by him, please click on links. See also "AA Dr. Bob: The Man and the Physician," 1978 Grapevine article by someone who knew him personally.]

"Now we try to put spiritual principles to work in every department of our lives." – Big Book, p. 116

"A.A.'s Twelve Steps are a group of principles, spiritual in their nature, which, if practiced as a way of life, can expel the obsession to drink and enable the sufferer to become happily and usefully whole." – 12&12, Foreword, p. 15

"We are what we repeatedly do; excellence, then, is not an art, but a habit.” – Will Durant*

"Discipline is doing what needs to be done even when we don’t feel like doing it." – Anonymous

"Beyond a wholesome discipline, be gentle with yourself." – Desiderata, Max Ehrmann

"You will never reach your destination if you stop and throw stones at every dog that barks. " – Winston Churchill

"A spiritual discipline is an intentionally directed action which places us in a position to receive from God the power to do what we cannot accomplish on our own." – Richard Foster

"Discipline is the ability to do what’s important before it becomes urgent.” – Anonymous

"Either you run the day, or the day runs you." – Jim Rohn

"The purpose of a spiritual discipline is to give us a way to stop the war, not by force of will, but organically, through understanding and gradual training." – Jack Kornfield

"Gaining mastery or excellence in any field of endeavor requires following a particular discipline, a set of methods, exercises or practices peculiar to that field. Recovery in AA is no different. It too has its own set of disciplines." – PTP123

"Without the disciplines, our practice of the virtues would be haphazard. It would lack a framework and direction. Conversely, without the virtues, the disciplines would amount to empty rituals." – PTP4
* This is usually, and erroneously, attributed to Aristotle. It is Durant's paraphrase of him.