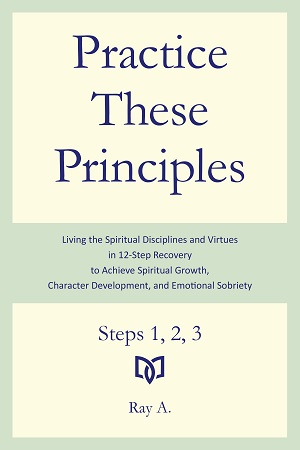 "In 1958 Bill W. penned an article in the AA Grapevine in which he confesses that, like many alcoholics with long-term sobriety, the joy of living had eluded him. Like them, he had failed to grow spiritually and emotionally and still lacked in emotional sobriety. For Bill, this expressed itself most dramatically in chronic spells of a deep depression that had bedeviled him for much of his recovery. One such spell had lasted eleven years and, at the time of writing, he had recently emerged from what he feared was another long relapse.

The  piece was an effort to re-examine the question of emotional sobriety and find an answer for the failure of many old-timers like him to attain it. This issue had been first raised with the publication of the 12&12 in 1953, when many AAs had achieved double-digit sobriety and found that not drinking just wasn’t enough. The book was written with the express purpose of applying the 12 Steps to the business of living, and not just getting, sober.

The earlier Big Book had of necessity focused on the urgent and immediate task of not drinking and helping others to stop (the chapter on the 12th Step deals exclusively with carrying the message, as reflected in its title, “Working with Others”). Though it implied the goal of emotional sobriety, it did not articulate it, and the concept remained undeveloped.

With the12&12, as we have seen, emotional sobriety becomes a central goal of the 12th Step and the ultimate goal of all the Steps, and practicing the principles in all our affairs the path to its attainment and transmission as we share it with others. But as we have also seen, the goal is not necessarily central for all alcoholics, and remains out of reach even for many for whom it is. There are those too who want the emotional benefits without the spiritual work and are unwilling to go through the spiritual process which the 12 Steps lay out. For many of us, practicing the principles in all our affairs remains the road less traveled.

Revisiting the issue in “The Next Frontier: Emotional Sobriety,”10 Bill attempts to probe deeper into the question of why emotional sobriety remains out of reach even for those of us who really want it and are willing to work for it. If our 12 Steps are right and we are convinced of the fact, and if we are earnestly trying to practice their principles in all our affairs, why are we still not able to achieve emotional sobriety even after many years in recovery? Why is it that the peace and the joy that the program promises still eludes us? This, says Bill, is the predicament, the real quandary, which many of us in long-term recovery face. . . .

Pondering why he hadn’t been able to see all this before led Bill to ask the question that goes to the heart of the problem of emotional sobriety. How, he asks, can we translate right belief, right mental or intellectual conviction, into right feelings or healthy emotional results, and therefore into healthy and happy living? This, as Bill acknowledges, is the problem that faces not only the alcoholic but anyone who is willing to live by right principles. To Bill, the problem stems from the unconscious, from which continue to stream our old fears and compulsions and false aspirations. Our main task, he says, becomes one of bringing our unconscious into conformity and harmony with what we now actually believe and know and want.

Though he apparently planned to pursue this question further in a later work, Bill never was able to do so. Nevertheless, the experience he recounts in the Grapevine piece reaffirms his original understanding that the key to emotional sobriety is the practice of these principles in all our affairs.

The essential question Bill raises is how to translate right principles into right emotions, and the answer is by right practice. The issue is what we understand by right principles and right practice. His story shows that Bill was able at some point to practice the principles of prayer, meditation, self-examination, surrender, and humility in ways that resulted in a spiritual and emotional breakthrough. Character defects and emotional liabilities were revealed to him that he had never seen before. Things which had lain in his unconscious were now brought to his conscious mind and he was able to act on them. He was then able to reach a new level of emotional stability and serenity which he continued to build on by giving of himself unconditionally, practicing the principles of love and service as Francis did.

Bill raises the right question and he does give us the results of his experience.  However, he does not extrapolate from that experience an explicit and comprehensive account of how the process of achieving emotional sobriety might work. This is exactly what we have tried to outline in this chapter.

When, through right action, right beliefs and convictions are integrated into our emotional apparatus and structure, then living them out becomes natural and no longer a struggle. Our moral and emotional dispositions are no longer at odds. We are no longer divided between what we believe, what we feel, and what we do. Seeing the problem of the unconscious from the perspective of a spiritually informed neuroscience, we could say that the renewal of our mind begins to effect a rewiring of our brain. Our biological life is progressively brought into conformity with the spiritual life in us. We become whole and harmonious human beings.

According to the understanding of the emotions that we have presented, how we react emotionally to situations depends on how we see those situations affecting the things we really care about. If status is important to us and we hanker after recognition and prestige, that desire comes with an emotion-disposition built into it that inclines us to a corresponding range of emotional responses. When our acts are motivated by that desire and they fulfill it, we may respond with, say, pleasure, pride, “elation,” or “grandiosity” (Bill’s words), depending on the intensity of the desire and effort. When they don’t fulfill it, we may react with, say, disappointment, frustration, or anger. Or, as in Bill’s case, with depression, when we “fight” for our heart’s desire and we lose. . . .

If emotional sobriety it is to become a practical reality in our recovery then, we need to see how a continuing spiritual awakening and the practice of the principles that bring that awakening about can work to shape our emotions. We need to see how the principles, understood as spiritual disciplines and virtues, can be practiced in all our affairs to build our character as the spiritual bedrock of our emotions, so that we become naturally inclined to the good and to the healthy, morally and emotionally, in the things that we do and in the things that we feel.

It is through the steady assimilation and integration of these transformative spiritual, moral, and emotional habits that a right mental conviction can be translated into a right emotional result, and, by the grace of God, emotional sobriety achieved."