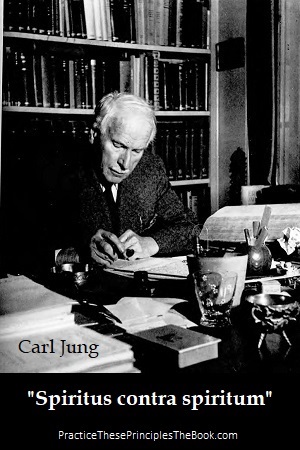 It begins with Rowland H., the “certain American businessman” who, as the Big Book tells it, had everything going for him. Except that he couldn’t stop drinking. And there was nobody who could help him. After years of treatment, the best sanatoriums and psychiatrists had failed him. Desperate, Rowland traveled abroad and went under the care of psychiatrist Carl Jung. To no avail. Acknowledging his own failure to help him, the Swiss doctor informed Rowland that he had never seen a single case like his recover.

Taken aback, Rowland asked if there were no exceptions. Yes, responded Jung. Every once in a while, here and there, “alcoholics have had what are called vital spiritual experiences.” These “appear to be in the nature of huge emotional displacements and rearrangements. Ideas, emotions, and attitudes which once were the guiding forces of the lives of these men are suddenly cast to one side, and a completely new set of conceptions and motives begin to dominate them.” That’s exactly the kind of change his treatment had tried to bring about, explained Jung, “but I have never been successful with an alcoholic of your description” (Big Book, p. 27).

Being a good church member, Rowland expressed his sense of relief to the doctor, who proceeded to explain that, “while his religious convictions were good, in his case they did not spell the necessary vital spiritual experience.” If they had, he would have recovered.

Rowland returned home, joined a grassroots evangelical movement called the Oxford Group, had a spiritual experience, and stopped drinking. He then carried this message to Ebby T., who also joined the Group, had his own experience, and also stopped drinking. Ebby then carried the message to Bill W., another desperate drunk who had also been declared hopeless by his psychiatrist, Dr. William D. Silkworth (“The Doctor’s Opinion,” Big Book, pp. xxiii – xxiv). Bill had his own spiritual experience and stopped drinking. Ebby then brought Bill a copy of psychologist William James’ Varieties of Religious Experience, the book which would help Bill make sense of what had happened to him and to Ebby and Rowland. Through the Oxford Group connection, Bill would later bring the message of a spiritual awakening to Dr. Bob, himself a member of the Group.

This, in a nutshell, is the historical background of how the concept of a spiritual awakening led to the founding of Alcoholics Anonymous. “In the wake of my spiritual experience,” Bill wrote to Dr. Jung many years later, "there came a vision of a society of alcoholics, each identifying with and transmitting his experience to the next—chain style. If each sufferer were to carry the news of the scientific hopelessness of alcoholism to each new prospect, he might be able to lay every newcomer wide open to a transforming spiritual experience. This concept proved to be the foundation of such success as Alcoholics Anonymous has since achieved” (The Language of the Heart, p. 279).

“There is a solution,” declares the Big Book in the chapter by that name (p. 25), and that solution is the transforming spiritual experience Bill writes Dr. Jung about. That’s the foundational principle and cornerstone of the AA program and its 12 Steps. Our admission of powerlessness over alcohol is the first in a series of Steps which, as Step 12 declares, result in such an experience or awakening: “Having had a spiritual awakening as the result of these Steps. . .”

Why does working the Steps result in a spiritual awakening? Because of the nature of the principles embedded in them: “A.A.’s Twelve Steps are a group of principles, spiritual in their nature, which, if practiced as a way of life, can expel the obsession to drink and enable the sufferer to become happily and usefully whole” (12&12, p. 15). The result flows from the practice.

As plain and practical as the concept is, it obviously raises many questions. In the posts below we explore how our two texts deal with them, and the understanding PTP derives from their explanations.

[Image: Carl Jung at his desk. The quote is Latin for "Spirit against spirits," from his letter to Bill W., where Jung explains the alcoholic's need for a spiritual experience. “Spirit” refers to a Higher Power and "spirits" to those of the distilled kind. For the exchange of letters, see The Language of the Heart, pp. 276–282. For an audio of this post, please click on link.]