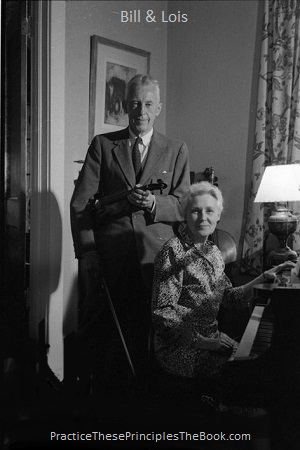 These are in essence the questions we explore in Practice These Principles. The short answers to each are relatively simple.

“These principles” are the activities each of the Steps calls for and the qualities required to do them well. In Step 4 the activity is making a moral inventory of ourselves and the qualities such things as humility, honesty, and thoroughness. “In all our affairs” means in all moral situations in life, those which involve right and wrong action, doing good or doing harm. “Practice” means taking the right action repeatedly and intending its good consistently.

This practice is what we wish to make a few introductory remarks about here. It’s been known since time immemorial that we become good at doing something by doing it over and over again. The maxim “practice makes perfect” encapsulates this familiar bit of ancient wisdom.

Experience has always shown that, if we repeat an action enough, it will become a habit, that is, something we don’t have to think much about but instead do more or less automatically and with a minimum of conscious and deliberate effort. We’ll find it easier to do and therefore will do it better.

Now, that’s all well and good. Few of us would argue with that, nor would many have any trouble seeing how it applies to anything that involves learning, from the simplest activity like riding a bike or driving a car to the most complex such as mastering a particular specialty in physics or mathematics. It is probably fair to say, however, that most of us would have a lot of trouble seeing how it applies to the moral life, to mastering ourselves, doing good and avoiding evil, living well, being happy. And no wonder: that is, after all, the most complex thing of all.

And yet, AA says it does apply. That’s the whole thrust of that last phrase in the last Step. To the extent that living well is a function of our character, and our character a function of habit, to that extent it is a function of the things we practice and the person we become. We are what we repeatedly do, the ancients suggested, from which it follows that, as we are, so do we live.

“Habit,” said Steven R. Covey, “is the intersection of knowledge (what to do), skill (how to do), and desire (want to do).” It is crucial that we know the principles we are to practice. Only on the basis of such knowledge can we practice them effectively. Otherwise, our practice amounts to little more than mindless action. It is like trying to learn to play the piano by banging repeatedly on the keys, oblivious to the components of the process and how it unfolds.

In Practice These Principles, we argue that the activities embedded in the Steps are properly understood as spiritual disciplines, and the qualities needed to do them well as the traits of character traditionally understood as virtues. These are the sorts of principles we are called to practice and turn into habits. The notion of habituation is intrinsic to both. A discipline is “Training expected to produce a specific character or pattern of behavior, especially training that produces moral or mental improvement” (American Heritage Dictionary). A virtue is precisely that, a particular character or pattern of behavior, a good or excellent moral trait produced by the training.

Going to those meetings and reading that book can awaken the desire, however, especially if we’re hurting. Pain is a great motivator. That’s why the program says we need to hit bottom. Most of us won’t do what we have to do unless our backs are up against the wall.

That turns out to be the silver lining in the pain, however, for it is “the price of admission into a new life” (12&12, S7, p. 75). Pain is “the touchstone of all spiritual progress” (S10, p. 93) because it opens us up to the spiritual awakening which makes such progress possible.

Using humility as an example, the 12&12 acknowledges that this can be a very long process. “To get completely away from our aversion to the idea of being humble, to gain a vision of humility as the avenue to true freedom of the spirit, to be willing to work for humility as something to be desired for itself, takes most of us a long, long time” (S7, p. 73).

But when we do become so willing, when we do desire it for itself, we discover that humility is “a healer of pain.” Recounting that kind of experience, the book observes how “We began to fear pain less, and desire humility more than ever.” Gradually, “We saw that we needn’t always be bludgeoned and beaten into humility. It could come quite as much from our voluntary reaching for it as it could from unremitting suffering. A great turning point in our lives came when we sought for humility as something we really wanted, rather than as something we must have” (p. 75).

It works like that with every virtue. We can truly practice it and make it our own when we desire it for itself, not because some authority tells us we must have it, or because it will help keep us out of trouble, or for some other reason extraneous to the virtue itself.

Continuing and repeated practice turns principle into habit and habit into trait of character. ”Like states arise from like activities,” writes Aristotle, “we acquire a particular quality by constantly acting a particular way. We become just by performing just actions, temperate by performing temperate actions, brave by performing brave actions.” So too do we become honest by telling the truth, grateful by giving thanks, kind by doing kindly deeds.

In doing we become, and in becoming we change. To change is to exchange habit for habit, ceasing to practice anger and greed and fear and practicing instead forgiveness and generosity and faith.

"His [the alcoholic’s] ways of thinking and doing are the habits of years." – Big Book

"For we can neither think nor act to good purpose until the habit of self-restraint has become automatic."
– 12&12

"Day by day, what you do is who you become." – Heraclitus

"The soul, like the body, accepts by practice whatever habit one wishes it to contract." – Socrates

"For have you not perceived that imitations, whether of bodily gestures, tones of voice, or modes of thought, if they be persevered in from an early age, are apt to grow into habits and a second nature?" – Plato

"It is no easy thing for a principle to become a man’s own unless each day he maintain it and work it out in his life." – Epictetus

"Make a habit of two things: to help, or, at least, to do no harm." – Hippocrates

"Virtue is a habit of the mind, consistent with nature and moderation and reason." – Cicero

"A nail is driven out by another nail. Habit is overcome by habit." – Desiderius Erasmus

"The greater part of our happiness or misery depends on our dispositions and not on our circumstances."
– Martha Washington

"Each year one vicious habit rooted out, in time might make the worst man good throughout." – Benjamin Franklin

"The chains of habit are too weak to be felt until they are too strong to be broken." – Samuel Johnson

"We first make our habits, then our habits make us." – John Dryden

"If we refuse practice, it is not God’s grace that fails when a crisis comes, but our own nature. When the crisis comes, we ask God to help us, but He cannot if we have not made nature our ally. The practicing is ours, not God’s." – Oswald Chambers

"Good habits, once established, are just as hard to break as are bad habits."– Robert Puller

"Habit is either the best of servants, or the worst of masters." – Nathaniel Emmons

"All habits start slowly and gradually and before you know you have the habit, the habit has you." – Zig Ziglar

"Bad habits are like a comfortable bed, easy to get into, but hard to get out of.”– Anonymous

"Repetition of the same thought or physical action develops into a habit which, repeated frequently enough, becomes an automatic reflex." – Norman Vincent Peale

"Motivation is what gets you started. Habit is what keeps you going." – Jim Rohn

"Cultivate only the habits that you are willing should master you." – Elbert Hubbard

"Our character is basically a composite of our habits. Because they are consistent, often unconscious patterns, they constantly, daily, express our character." – Stephen R. Covey

"The knowledge of principles becomes practically insightful only when the principles are embedded in habits formed by reflective experience and deepened by committed practice." – William C. Spohn

"Concrete habits are the means of knowledge and thought  . . . [they] do all the perceiving, recognizing, imagining, recalling, judging, conceiving and reasoning that is done. ‘Consciousness,’ whether as a stream or as special sensations and images, expresses functions of habits, phenomena of their formation, operation, their interruption and reorganization." – John Dewey

"When you are not feeling particularly friendly but know you ought to be, the best thing you can do, very often, is to put on a friendly manner and behave as if you were a nicer person than you actually are. And in a few minutes, as we have all noticed, you will really be feeling friendlier than you were. Very often the only way to get a quality in reality is to start behaving as if you had it already." – C. S. Lewis

"Excellence is an art won by training and habituation. We do not act rightly because we have virtue or excellence, but we rather have those because we have acted rightly. We are what we repeatedly do. Excellence, then, is not an act, but a habit." – Will Durant**

"Merely changing what we believe is not enough. We must also begin to change our practice." – James S. Spiegel

"If, for instance, I concentrate on being tolerant and kind at all times, with everyone, it will soon become an automatic reaction, no matter how trying the circumstances may be. This new attitude will color whatever I do and make me more acceptable, to myself as well as to others." – One Day at a Time in Al-Anon

"Continuing to take a personal inventory means that we form a habit of looking at ourselves, our actions, our attitudes, and our relationships on a regular basis." – Just for Today: Daily Meditations for Recovering Addicts

"Our brain is a pattern-making and habit-forming machine. To make sense of data, it sorts, labels, classifies, and organizes things, creating cognitive frameworks on the basis of which it then operates more or less automatically." – PTP4 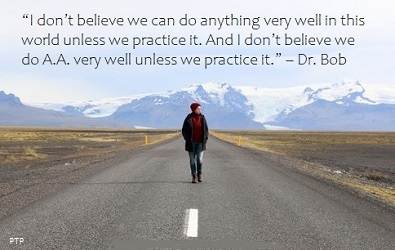 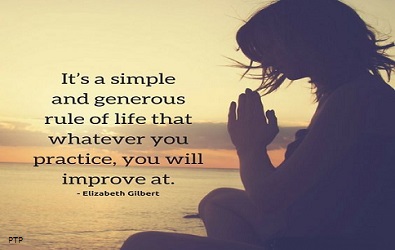