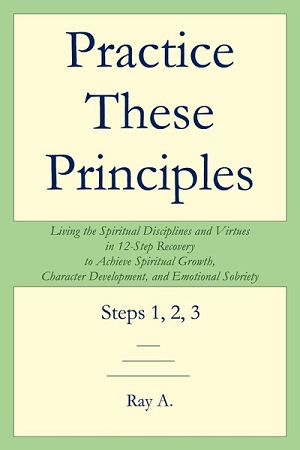 "As we saw earlier, Step 2 doesn’t propose that we start our journey of faith by adopting a new philosophy or code of morals. Nor are we asked to adopt a set of religious doctrines. Instead, we are to conduct what in some ways is similar to a scientific experiment. In his address at the 20th Anniversary Convention of AA in St. Louis, Dr. Samuel M. Shoemaker spoke of how this works. An Episcopal clergyman, Shoemaker was the leader of the Oxford Group in NYC where Rowland H. and Ebby T. got sober and where Bill W. was initiated in the experience that eventually led to AA’s formation. Says Shoemaker:

“The basis of that belief [in Step 2] was not theoretical; it was evidential. Right before us were people in whose lives were the beginnings of a spiritual transformation. You could question the interpretation of the experience, but you couldn’t question the experience itself.”7

This is a challenge to the atheist or skeptic who places a great deal of stock on empirical proof.  He will find in the rooms of AA all the hard evidence he needs. The issue before him is not whether he will believe, but whether he will act. This is why we tell the newcomer “Utilize, don’t analyze.” The slogan is a call to simplicity. Still prone to complicate everything, the newcomer can get stuck in interpretation and “analysis paralysis” and not pick up the “simple kit of tools” laid out before him.

The AA experience is that though we could not think ourselves into right action when we drank, we can act ourselves into right thinking once we are in the rooms. Shoemaker explains that when we have tried reason and reason has left us wanting, the time comes to make a decision and take action. The decision can be simple, such as entering into an experiment.

He sees the process as being more like science than like philosophy. Rather than reasoning things out using abstract logic, we choose a hypothesis. We then act as if the hypothesis is true and see whether or not it works. If it doesn’t work, we dispose of it. But if it is true, we will see the concrete results in our lives. That, he says, is how the experimental approach works. We first lean on other recovering alcoholics who have found a solution, and then we lean on the Power that stands behind them.8

To experiment with Step 2 is to give ourselves to the experience of Step 2 (the two words share a common root, meaning to try, proof, or test). We let go of any resistance and practice the principles set out before us, following the example of those who give evidence of success. . . .

As we proceed to Step 3 and to the other Steps, we will find ourselves coming back to the fundamental questions raised by Step 2. How do we come to believe? What is the Power that is greater than ourselves? How does that Power heal us? And what is the sanity to which we are restored? Though some of us may not reflect much on these questions, we cannot work the Steps without in practice addressing them, for whether we are conscious of it or not, the answers we give inform the actions we take.

Step 2 rests on a set of specific principles, and these principles are practiced with reference to God. They have no other object. The discipline of surrender and the virtues of humility, simplicity, willingness, open-mindedness, and honesty are all geared to bring us to a faith and a hope in a Power who can make us whole. These principles gradually whittle away and progressively displace the attitudes and character defects that block our way to him: rebellion and defiance, intellectual pride and religious intolerance, willful self-deception and denial. They are the principles upon which we begin to build our relationship with God. We practice them in all our affairs because a right relationship with God is the necessary foundation of all we do as we grow in our journey of recovery.

Ultimately, in the larger spiritual sense, being restored to sanity means being brought to a relationship with God that we have never experienced but for which we were originally intended. It means becoming, one day at a time, the persons God created us to be. This is, ultimately, what we come to believe, our faith and our hope.

The 12&12 says that Step 2 is “the rallying point for all of us,” that whether we are believers, agnostics, atheists, or ex-believers, “we can stand together on this Step.” Why is that? Isn’t that counterintuitive, given the disparate nature of such a group? The reason is simple. What is needed to get started is not faith. What is needed is “humility and an open mind.” Humility disposes us rightly toward God; an open mind disposes us rightly toward the AA message. Given these, “every AA meeting is an assurance that God will restore us to sanity.”