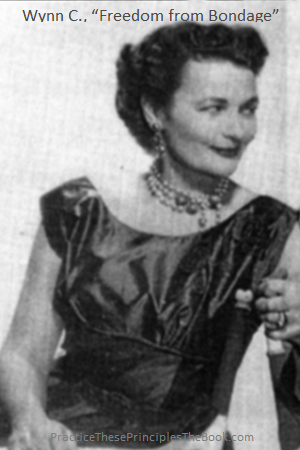 "Could I also suggest that you look at excessive guilt for what it is? Nothing but a sort of reverse pride . . . you should not blame yourself for failure; you can be penalized only for refusing to try for better things." – Bill W., As Bill Sees It

"[H]e came to the conclusion that it was better to take those risks than to stand before his Creator guilty of such ruinous slander. He saw he had to place the outcome in God’s hands or he would soon start drinking again, and all would be lost anyhow." – Big Book

"This feeling of being at one with God and man, this emerging from isolation through the open and honest sharing of our terrible burden of guilt, brings us to a resting place where we may prepare ourselves for the following Steps toward a full and meaningful sobriety." – 12&12

"If we confess our sins, he is faithful and just to forgive us our sins and to cleanse us from all unrighteousness." – 1 John 1:9
"Just so, I tell you, there will be more joy in heaven over one sinner who repents than over ninety-nine righteous persons who need no repentance." – Luke 15:7

"Nothing is more wretched than the mind of a man conscious of his guilt." – Plautus

"Whatever guilt is perpetrated by some evil prompting, is grievous to the author of the crime. This is the first punishment of guilt that no one who is guilty is acquitted at the judgment seat of his own conscience." – Juvenal

"Let wickedness escape as it may at the bar, it never fails in doing justice upon itself; for every guilty person is his own hangman." – Seneca

"The greatest incitement to guilt is the hope of sinning with impunity." – Cicero

"Men's minds are too ingenious in palliating guilt in themselves." – Livy

"Tears of repentance wash out the stain of guilt." – St. Augustine

"From the body of one guilty deed a thousand ghostly fears and haunting thoughts proceed." – William Wordsworth

"A guilty mind can be eased by nothing but repentance, by which what was ill done is revoked and morally voided and undone." – Benjamin Whichcote

"A man does not have to be an angel in order to be a saint." – Albert Schweitzer

"Guilt is not a response to anger; it is a response to one’s own actions or lack of action. If it leads to change then it can be useful, since it is then no longer guilt but the beginning of knowledge.” – Audre Lorde

"[I]f we are going to be kind, let it be out of simple generosity, not because we fear guilt or retribution."– J. M. Coetzee

"There was more than one type of guilt. You might do something horrible that you later regretted. But you could also feel guilty for something you'd not done!” – Joseph Delaney

"All denial of guilt keeps people out of the area of love and, by inducing self-righteousness, prevents a cure. The two facts of healing in the physical order are these: A physician cannot heal us unless we put ourselves into his hands, and we will not put ourselves into his hands unless we know that we are sick. In like manner, a sinner’s awareness of sin is one requisite for his recovery; the other is his longing for God. When we long for God, we do so not as sinners, but as lovers." – Fulton J. Sheen

"Negative emotions like loneliness, envy, and guilt have an important role to play in a happy life; they're big, flashing signs that something needs to change." – Gretchen Rubin

"Let us not search for the guilty ones only among others; let us speak the bitter truth: we are all guilty, each and every one of us." – Maxim Gorky

"To err is human; but contrition felt for the crime distinguishes the virtuous from the wicked." – Vittorio Alfieri

"There is no pillow so soft as a clear conscience." – French Proverb

"All religions remind us that actions have consequences for which guilt can and must be acknowledged, forgiveness humbly begged, reconciliation sought." – Kenneth L. Woodward

"If allowed to be, the heart is self-policing, and a reasonable measure of guilt guards against corruption." – Dean Koontz

"Guilt is perhaps the most painful companion of death." – Elisabeth Kübler-Ross

The only things you give yourself when you cheat are fear and guilt." – Anonymous

"Every saint has a past and every sinner has a future." – Oscar Wilde

"Only through positive action can I remove the remains of guilt and shame brought on by alcohol. Step Eight provides me with a way of forgiving myself. I alleviate much of the hidden damage when I make my list of those I have hurt. In making amends, I free myself of burdens, thus contributing to my healing.” –  AA’s Daily Reflections

"When I am troubled by a feeling of guilt, I cannot put into my day all [the good] I am capable of. I must rid myself of this feeling, not by pushing it aside, but by identifying it and correcting the cause. Free of this weight, I can put all my best into my day’s work and my spiritual growth. Then I will have something worthwhile to give others, instead of concentrating on my own frustrations." – One Day at a Time in Al-Anon

"Guilt is a burden that keeps me from giving myself fully and freely to the present. I can begin to rid my mind of guilt by quietly admitting where and when I have done wrong to people, including myself." – Al-Anon’s Courage to Change

"I am grateful for my assets and accept my liabilities. Through willingness and humility, I am freed to progress in my recovery and achieve freedom from guilt." – Just for Today: Daily Meditations for Recovering Addicts

"Often we are reluctant to track down the source of our guilt or resentment; we’re afraid that what we find may force us to change the way we live and work, and change is painful.” – The Promise of a New Day

"Our attitude toward the past is to repair the damage done, put it behind us, and try to not repeat it. We do that through Steps 4 to10. If we do our job, what is mendable will mend and the guilt, regret, shame, resentment, depression and other such feelings concerning our past will wane. We will then use its lessons to help others." – PTP123

"Rather than deny our guilt, our task in taking inventory is to establish when it is true to the facts and when it is not. If we stick to answering the question of whom we have hurt, the facts will become clear in most cases." – PTP4

To return to Emotional Sobriety please click on link.