AA and the Oxford Group 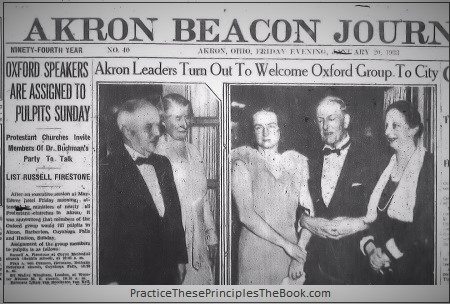 For the first 12 years of my sobriety, I attended meetings in the Gramercy Park section of New York, near the headquarters of the Oxford Group at Calvary Episcopal Church and their 23rd Street mission, where Bill W. first got sober.  AA meetings were still held in the adjacent church building, where Bill, Ebby T., Hank P., Fitz M. and other future AAs first met.

It was at one of those meetings that I first admitted my life had become unmanageable, after hearing a woman named Irene share about the unmanageability of her own life when she drank. Yet I had no idea of the history that surrounded me. Apparently, neither were apparently my fellow alcoholics. I never even heard the name Oxford Group mentioned.

That changed many years later when I moved to a rural area upstate. At Big Book meetings in particular, the subject of AA’s origins in the Group would sometimes come up. Invariably, this would arouse controversy. People either liked the Group, or intensely disliked it. The reasons were never clear. No one actually seemed to know much about it. Still, it was obvious that the divide had to do with religion.
That, as I eventually learned, had divided AAs from the very start. That’s why the Big Book insists ours is a spiritual, not a religious program. That’s also why it insists on open-mindedness as one of the key principles that will enable us to work it. Any alcoholic can recover, it asserts, “provided he does not close his mind to all spiritual concepts” (p. 568).
That assertion would seem to lay the need for open-mindedness more heavily on those who have a problem with the spiritual angle of the program than on those who don’t. And that is correct. They are the ones for whom the "contempt prior to investigation" quote is intended. They are the ones who “can only be defeated by an attitude of intolerance or belligerent denial” with regards to things spiritual.
Yet the Big Book doesn’t mean to suggest that open-mindedness is required only of the agnostic, the atheist, or the secularist in general. Believers too may need to practice this principle, and with regards to the same issue. Both groups tend to conflate spirituality and religion, only from different directions. One is disposed to reject things because of their association with religion while the other is disposed to accept them for exactly the same reason, particularly if it is their religion.
Something of this sort appears to be at work in the division evident in the rooms regarding the Oxford Group and its influence on AA. Some seem to oppose the Group simply because of its evangelical affiliation, while others seem to support it precisely because of that affiliation. In neither case does the conflict seem to have anything to do with the facts. Minds have been already made up, and closed.
Our two texts’ silence on the matter has not helped. Fearing to stoke the flames of controversy, Bill made a decision not to make any direct reference to the OG in the Big Book or the 12&12. Indeed, for a long time he sought to distance AA from the Group in the public eye. Nevertheless, Bill always kept an open mind. When he finally acknowledged the Group’s contributions, he was even-handed and balanced. The Oxford Group, he said, had taught AA both what to do and what not to do.
Borrowing from the literature on the subject, we will try to summarize what these positive and negative lessons are, making available the basic information that can help us to come to a reasonable and fair-minded understanding of the issue. For those who may wish to explore the topic further, sources are footnoted.

The tension between the alcoholic and the non-alcoholic members of the Group surfaced early on. Once Bill started to meet separately with alcoholics, they came to be seen as a “secretive, sub-group,” as an assistant to Shoemaker in NY depicted them. In the spring of 1937, while Sam was on vacation, OG alcoholics at Calvary were prohibited from attending the Tuesday night meetings at Bill’s house in Brooklyn.41
That led to NY’s break with the Group later that year. After being notified of the break, Dr. Bob asked Akron OG alcoholics to meet separately from the non-alcoholics, leading to a complete break in 1939. Cleveland took the lead, separating itself from the Akron OG group and starting to meet in its own home town under the name "Alcoholics Anonymous," after the name of the Big Book, which had just been published.
An open-minded appraisal of the evidence regarding the OG influence on AA would lead one to conclude that, as Bill noted, there was a lot that was good and a lot that was bad. On balance, it is clear that the good far outweighed the bad.
That is why Bill acknowledged that the break was very painful, for despite all the Group’s drawbacks, AA’s debt to it was “immense.” That is also why, singling out Sam Shoemaker in particular, Bill writes that “He will always be found in our annals as the one whose inspired example and teaching did most to show us how to create the spiritual climate in which we alcoholics may survive and then proceed to grow. AA owes a debt of timeless gratitude for all that God sent us through Sam and his friends in the days of A.A.’s infancy.”42
And so to the principle of open-mindedness, Bill adds the principle of gratitude, a virtue of the heart more than of the mind. We can be grateful because, without the OG, there would be no AA. We can also be grateful because, had we stayed in the OG, there would be no AA either.

[Posted: 02/28/18. Image: Akron Beacon Journal headlines local Oxford Group event, January 20, 1933. Dr. Bob would soon join the group, which would meet at the home of T. Henry and Clarace Williams. For a talk on AA and the OG, see "Jay S. – AA History (Part 2): Oxford Group Origins and Connection to AA." See also Practice These Principles and What Is the Oxford Group, which combines the original 1933 booklet about the Group's principles with a modern-day, secular-language version of it. ]