A Tale of Two Cities: Akron, NY, and The Book That Started It All 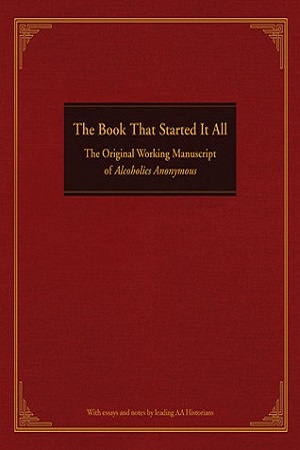 The Book That Started It All: The Original Working Manuscript of Alcoholics Anonymous, by Anonymous

Bill W. wrote most of the Big Book between May 1938 and January of 1939, discussing drafts of the work in progress at the Clinton Street meeting in Brooklyn Heights and sending them to Dr. Bob for review by the Akron group. The feedback from Akron was consistently positive. But in NY, a heated debate broke out. According to Bill, three points of view emerged: “conservatives” who argued for an explicitly Christian text, “liberals” who didn’t object to using “God” but wanted a spiritual rather than a religious document, and the “radical left-wing” who wanted to delete “God” from the book entirely and produce a work of psychology.

Unable to agree among themselves, the three factions eventually named Bill the final arbiter of the book’s content. An initial draft of the manuscript was completed by February. Concerned that the book be widely acceptable, some 400 mimeograph or Multilith copies were sent out for comment. As these were returned, it became evident that the book had been well received in all quarters, the medical and religious fields included.

Still, the dispute in NY went on unabated. The minority of “radicals” there had always seen the book as an opportunity to educate the “benighted Akronites,” and they pressed their effort to put God in his place. In this, they had an ally in the person of a Dr. Howard, a NJ psychiatrist whose returned mimeograph was filled with edits crossing “God” out and inserting other terms.

From the start, Bill had recognized the two horns of the dilemma facing the book. “If you labeled it a strictly Christian book” all kinds of problems would arise and many alcoholics would stay away, while if “we make a psychological job of it nobody would get well from it.” Experience had shown that the strictly religious approach had very limited success and the strictly psychological approach practically none.

As the printer’s copy of the book was prepared, comments, suggestions, and corrections were transferred to one of the mimeographs, producing the “original working manuscript,” a graphic representation of the divergent currents which would coalesce into something entirely new, “The Book That Started It All.”

In the end, the book presented a clearly spiritual course, rejecting practically all of the edits that would exclude God while at the same time reforming the religious language that would exclude many alcoholics and divert all from their primary purpose of staying sober and helping others to achieve sobriety.

As we know, “God” was replaced with a “Power greater than ourselves” in Step 2, and modified with “as we understood Him” in Steps 3 and 11. These changes are not as big as they might seem. The book already contained ample language reassuring the alcoholic that no particular understanding of God was required to join AA and get sober: “When, therefore, we speak to you of God, we mean your own conception of God. This applies, too, to other spiritual expressions which you find in this book” (p. 47). Statements like this are not later additions. They were there in the original mimeograph copy. Moreover, “as we understood Him” had been used by the Oxford Group, and Ebby had resorted to a similar expression to soften his initial "I got religion" approach to Bill.

A related but more original and encompassing change resulted from Dr. Howard’s insistence that the book be descriptive rather than prescriptive, something which Dr. Silkworth and Dr. Tiebout had earlier suggested. In practice, this involved a language shift: from future to past tense; from predicting outcomes to narrating events; from prescribing what you must or should do to describing what we did; from directing to suggesting; from pointing out weakness to admitting to it, talking from the heart more than from the head, sharing experience rather than trying to teach, preach, or instruct.

Underlying this approach was a principle that would give the book its markedly spiritual and practical character. This was “attraction rather than promotion,” a principle that would distinguish the book and thenceforth AA not only from the injunctive approach of religion, but from the analytical and prescriptive approach of psychology as well. With it, other principles would come into play, so that we'll find a certain restraint in the tone of the book, a certain modesty of expression, a certain tolerance and even generosity toward divergent views, a humble recognition of the limits to knowledge and understanding, particularly when it comes to spiritual things and to God.

The edits (indicated by the cross-outs) to the well-known lines leading up to the 12 Steps are illustrative: “Remember that you are dealing we deal with alcohol . . . Without help it is too much for you us . . . You must May you find Him now! Half measures will avail you availed us nothing. You We stood at the turning point. Throw yourself under We asked His protection and care with complete abandon.” So is the line introducing the ABCs: “Our description of the alcoholic, the chapter to the agnostic, and our personal adventures before and after have been designed to sell you make clear three pertinent ideas.” This reminds us that many of the early alcoholics were salesmen, and their promotional instincts reflected their trade as much as their theology, whether religious or atheist.

As Bill summed it up, the changes still left God in the Steps and in the Big Book, but “now expressed in terms that anybody—anybody at all—could accept and try.” As we know, however, the battle over the book continues. Some are still trying to take God out, along with other language they find objectionable. Many have removed him entirely from their own version of the Steps; others have reversed the three original changes. Both sides have started their own groups and written their own books. So far, neither of these movements has come up with a better text than the Big Book, or a better program or fellowship for those who want to get sober.

God is still in the Big Book and we are free to talk about him all we want. But if talk about God is what got us sober, there would have been no need for AA in the first place. That there is a “who” to recovery—“One who has all the power”—the Big Book leaves no doubt: “That One is God.” But there is also a “what” and a “how” to recovery. These are the spiritual principles that are embedded in the Steps and which the Big Book also makes clear proceed from, and are practiced through, that Power. The question is how far we are willing to go to understand these principles and to practice them in all our affairs.

The principle of “Attraction rather than promotion” is at the heart of the changes made to the Big Book. It is predicated on another concept that permeates that book: “a faith that works.” If the faith that we practice through the God of our understanding works, it will bear fruit in the way we live. Such fruit attracts: others will “want what we have.” If it doesn’t work, that too will be evident, and talk about God will have the opposite effect. For, as “A Vision for You” tells us at the conclusion of the book, there’s another spiritual principle at work in all of this: it says that we can’t give what we don’t have (p. 164).

Bill W. saw the hand of Providence at work in “The Book That Started It All.” Considering the millions of alcoholics and other sufferers who have recovered thanks to it, that seems like a reasonable attitude to take.

Footnote: Leading the opposing factions on each end of the dispute were three hard-driving salesmen: Fitz M. for the religious side and Hank P. and Jimmy B. for the atheists. Fitz is the former atheist whose conversion experience is told in Big Book's pp. 55–56, and “Our Southern Friend” in the Personal Stories section. He was school friends with Jimmy, whom he helped to get sober. Jimmy tells his own story in “The Vicious Cycle,” but without mentioning an experience we only read about in Tradition Three concerning a certain “Ed.”  Hank was Bill’s first success in NY after coming back from Akron. He wrote “To Employers” and “The Unbeliever,” the first story in the Big Book’s first edition (now in Experience, Strength & Hope). Pride and resentment would lead him back to the bottle and he would make the rounds of Akron and other places leveling angry charges against Bill. He would die drunk at the age of 57. See Alcoholics Anonymous Comes of Age (pp. 161–168) and Kurtz’ Not-God (pp. 63, 69–71, 75–76).