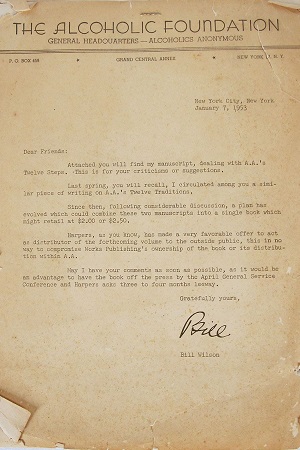 The Twelve Steps and Twelve Traditions was published April 1953, almost 14 years after the Big Book. The need for a second book to supplement the first was strongly felt by Bill W. and other alcoholics.

When the Big Book first came out, Bill had only 4 ½ years sober, Dr. Bob 4, and most others in the fledging fellowship considerably less than that. Not drinking was a totally new experience and the book understandably concentrated on that.

However, as the years rolled on and some began to accumulate double-digit sobriety, they discovered that, by itself, abstention from alcohol was just not enough. The dry-drunk syndrome was becoming all too obvious. One could be sober and still be miserable and lead less that satisfactory lives. Bill himself was a prime example of this. His sobriety had been undermined by more than a decade of unrelenting depression.

So the question was on the table. Could the 12 Steps help us to achieve more than physical sobriety? Could they help us grow spiritually, build character, become more stable emotionally, be happy?
The Steps portion of the 12&12 was written to address those questions. The Traditions portion was written to address a related question which had arisen as the “one hundred men and women” of 1939 had grown to tens of thousands by 1953. Could such a large and disparate continue to work together to help each other stay sober and achieve the goals of a full recovery?

“This startling expansion brought with it very severe growing pains. Proof that alcoholics could recover had been made. But it was by no means sure that great numbers of yet erratic people could live and work together with harmony and good effect.
Everywhere there arose threatening questions of membership, money, personal relations, public relations, management of groups, clubs, and scores of other perplexities. It was out of this vast welter of explosive experience that A.A.’s Twelve Traditions took form and were first published in 1946 and later confirmed at A.A.’s First International Convention in Cleveland in 1950. The Tradition section of this volume portrays in some detail the experience which finally produced the Twelve Traditions and so gave A.A. its present form, substance, and unity” (p. 18).

In June 2021, a revised edition of the 12&12 was published by Alcoholics Anonymous World Services. For the first time, it  alters the text.

“In recent years some members and friends of A.A. have asked if it would be wise to update the language, idioms, and historical references in the book to present a more contemporary image for the Fellowship. However, because the book has helped so many alcoholics find recovery, there exists strong sentiment within the Fellowship against any change to it. In fact, the 2002 General Service Conference discussed this issue and it was unanimously recommended that: ‘The text in the book Twelve Steps and Twelve Traditions, written by Bill W., remain as is, recognizing the Fellowship’s feelings that’s Bill’s writing remain as originally published.’ However, with a focus on inclusivity, the 2021 General Service Conference updated and footnoted some of the original language for clarity.”

Two passages were changed, each accompanied by an explanatory footnote. They are highlighted in red below. The sentence preceding and following the Step Six paragraph in question are provided for context, though we should stress that only the full paragraphs can make the context completely clear.

[Image: Bill W.’s 1953 letter to The Alcoholic Foundation  soliciting comments on 12 Steps  manuscript he was submitting. He mentions a plan under discussion to combine the manuscript with the earlier one on the 12 Traditions and publish both as a single book by April. For readings of Steps 6 and 12 and for a related post, AA Preamble Changed, please click on links.]

“No matter how far we have progressed, desires will always be found which oppose the grace of God.

Some who feel they have done well may dispute this, so let’s try to think it through a little further. Practically everybody wishes to be rid of his most glaring and destructive handicaps. No one wants to be so proud that he is scorned as a braggart, nor so greedy that he is labeled a thief. No one wants to be angry enough to murder, lustful enough to rape, gluttonous enough to ruin his health commit the deadly sins of anger, lust, or gluttony.* No one wants to be agonized by the chronic pain of envy or to be paralyzed by sloth. Of course, most human beings don’t suffer these defects at these rock-bottom levels.

We who have escaped these extremes are apt to congratulate ourselves. Yet, can we?”

* This sentence has been updated from the original text to generalize the possible consequences of extreme emotions.

“Nearly every sound human being experiences, at some time in life, a compelling desire to find a mate of the opposite sex partner with whom the fullest union can be made—spiritual, mental, emotional, physical.* This mighty urge is the root of great human accomplishments, a creative energy that deeply influences our lives. God fashioned us that way. So our question will be this. How, by ignorance, compulsion, and self-will, do we misuse this gift to our own destruction? We A.A.’s cannot pretend to offer full answers to age-old perplexities, but our own experience does provide certain answers that work for us.”

* This sentence has been updated from the original text to reflect the inclusivity of the Fellowship.

To return to AA History Timeline, please click on link.